Match analysis is crucial for the improvement of a tennis player. Any competitive match is the final test of how good the player is in the technical, tactical, mental and physical aspects of the game.

Too many times I’ve seen coaches and parents analyzing tennis matches only by watchingthem rather than taking methodical notes.

This creates a very biased analysis because our beliefs, predispositions and attitudes cause us to see what we want to see.

Instead, we need to analyze the match based on objective facts rather than subjective – and sometimes biased – opinions, and these facts need to be carefully and methodically notedduring the match.

The match analysis you’re about to see is based on the so called Aggressive Margin which we first learned from John Yandell.

We’ve modified his system, and here’s how it works: 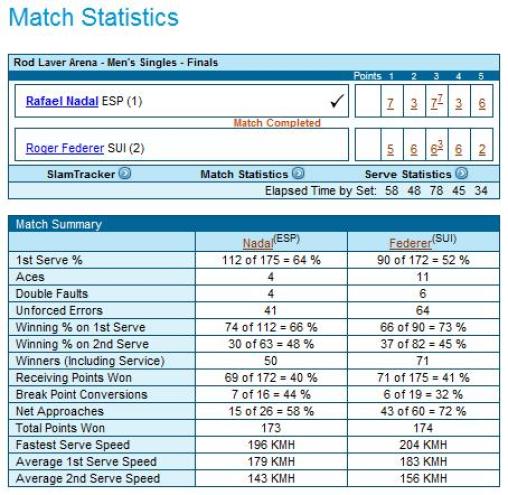 As you know, the official statistics of the match (often displayed on TV and on official tournament websites) count the number of winners (including on the service) and the number of unforced errors.

The main difference between the way official statistics are done and this system is done is that I also count shots that force errors. So, these are the shots that I believe forced the opponent to make a mistake.

These shots come into in the same category as winners; the player created and won the point. An unforced error, on the other hand, is a point that is “given” to the opponent where there is (at first glance) no ostensible reason for making the error.

I also look at the stroke with which the last point was made or lost, and note this in the table.

F stands for forehand, B for backhand, S for serve, Bv or Fv for volley, SM for smash, Br or Fr for return, Bp or Fp for passing shot, and I might add Fdrop or Bslice for forehand drop shot and backhand slice to be even more accurate in the analysis.

An example of the stats taken in one game of a match is as follows:

If the result is positive, that means that the player won more points than he lost. In other words, the player did not beat himself because he “gave” more points to himself than to his opponent.

The original Aggressive Margin from John Yandell counts only the numbers of winners, forcing shots and unforced errors, and does not take into account with which shot the last point was made.

I also use a comment section on the right which can include various things noted during the game.

When I do match analysis of the matches of junior tennis players whom I coach, I expand the comment section into techniques, tactics, and mental and physical aspects, and note in each section the weakness and strong sides of my player.

It’s very easy to see only mistakes (that’s how our mind naturally works; it looks for things that are not good). However, in order to have a realistic view of any player’s performance, a coach needs to determine the player’s strengths too.

It’s also easy to write a 10 page analysis seeing every little mistake and noting every little strength, so the coach needs to be selective in determining what he/she chooses to note, and then later work on.

It’s better to choose the most important things to note down. Note 1 to 5 things in each section in one set.

The priority are those weaknesses that cause the majority of the errors, or which are very often exploited by opponents. The strengths are very important for the player in order to build his confidence and to encourage the player’s development.

The player must become realistic in evaluating his/her playing abilities and skills. There is always room for improvement, and there are always positive things in every match on which the player can build confidence, and know that he/she can play tennis well.

This way of analyzing the match provides the player, the coach and the parent with objective and reliable data. It helps avoid arguments based on opinions, and helps the player and the coach know exactly what to work on, and what happened in the match.

Here’s what you can see from the analysis:

There are many more clues you can get from regularly analyzing matches like this. What works really well is comparing the analyses in the long term, for example in one year.