It sounds like the title of a ripsnorting Western movie: Last Stand at Indian Wells. But the scene will be the BNP Paribas Open (ESPN3, ESPNEWS, ESPN2), which begins this week in Indian Wells, California. And the principals in this show will be iconic tennis players Roger Federer and Rafael Nadal, attempting to halt the hammerlock top-ranked Novak Djokovic is putting on the men’s game.

Federer and Nadal both know what that’s all about. It wasn’t so long ago that one or the other of them was the guy with his foot on the neck of the ATP rank and file. Starting last July at Wimbledon, however, Djokovic stopped floundering and returned to the form that carried him to the zenith of the game in 2011.

“I had to really dig deep and just understand and use that as an opportunity to grow,” Djokovic said at the recent Laureus World Sports Awards ceremony, referring to the puzzling slump he endured for nearly two years starting in mid-2016. “[I had to] really change into a better version of myself.”

Djokovic was speaking in general, philosophical terms. But the observation applies to his game, as well, and he has accomplished that goal. Starting at Wimbledon, Djokovic has beaten Federer in two Masters 1000 tournaments without a loss and has whacked Nadal in their only meetings — two Grand Slam tests, a Wimbledon semifinal and the recent Australian Open final. The latter was a 6-3, 6-2, 6-3 blowout despite the way Nadal had slashed through his half of the draw.

ESPN analyst Brad Gilbert described the situation succinctly: “If Djokovic continues to play at the level he can, no one can stop him.”

The challenge facing Federer and Nadal in this month of the “Sunshine Double” — back-to-back Masters/WTA events, 10 days combined, at Indian Wells and Miami — is especially daunting because of the way Djokovic has quietly come to own March. He has won both tournaments back-to-back four times, including three consecutive times starting in 2014. Federer has won both events back-to-back three times, but just once in the past decade. Nadal has never won in Miami, but he did bag the Indian Wells title three times.

The task facing “Fedal” is enormous. At the moment, Federer appears to be in a better position to halt the Serbian juggernaut. The all-time Grand Slam singles champion won his 100th career singles title on Saturday in Dubai. He is thrilled with that achievement and above twisting himself into knots worrying about his record against Djokovic. Federer might be 37 years old, but he’s playing with house money and feeling no pressure to prove anything.

As he told the crowd in Dubai: “If I reach milestones like this along the way, it’s wonderful, but I’m really not here to shatter all the records.” 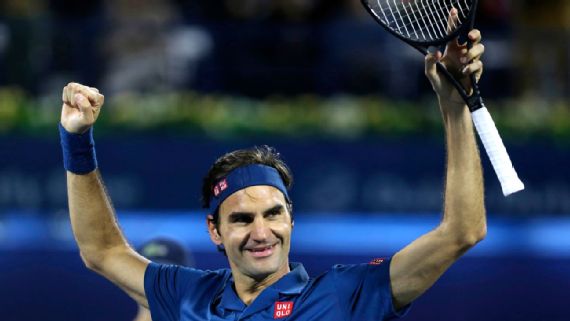 Federer’s grounded attitude is a great asset. More important, the California desert climate is usually pleasant, and the ball flies with celerity in the dry air. In the Dubai final, Federer hit roughly 40 percent of his shots (excepting serve) from inside the baseline — about twice the percentage hit by Stefanos Tsitsipas. It played a major role in Federer’s ability to dismantle the rising Greek star in a mere 69 minutes 6-4, 6-4.

True, Tsitsipas isn’t quite in Djokovic’s league as a defender or counterpuncher, but there is a level of offense that can take the racket out of any defender’s hand. Federer is one of the few pros capable of hitting that standard.

Nadal can’t bring that same measure of offense. He has even greater things to fret about. Off clay, his confidence just isn’t the same — even if his fighting spirit remains unfettered. It has been a rough few months for Nadal. The comprehensive way Djokovic beat him in the Australian Open final hurt. And just last week, Nadal absorbed a bitter, controversy-marred loss to Nick Kyrgios.

Nadal, however, is patient and flexible. Due to injury, this year’s first major was also his first tournament appearance since last year’s US Open. He acknowledged that Djokovic played a “fantastic” final in Australia but felt he was blasted to smithereens because he had too little time following his injury layoff to work on his defense.

“Five months without competing, having that big challenge in front of me, I needed something else,” Nadal said after the Australian final. “That something else, probably today, I don’t have it yet. That’s my feeling, to compete at this super-high level.”

The encouraging thing for the “King of Clay” is his history at Indian Wells. When he last won in 2013, he was also in the midst of a comeback, then from a seven-month injury layoff. He played less defensively, moving closer to the baseline or into the court to pressure his opponents. The aggressive mindset lasted beyond that tournament, helping Nadal reach a career-high 14 finals in 2013 and 10 wins, including two at the three majors he played.

“The conditions adapt very well to my game,” Nadal said of the Indian Wells Tennis Garden and the desert air after that 2013 win. “That’s the real thing. I feel like home. I feel very comfortable in this tournament. I feel very happy when I am here. Is more relaxing tournament than other ones, and probably that gives me a positive feeling.”

It will take positive feelings — and a lot more — for either Nadal or Federer to emerge from Indian Wells the winner.