France and Russia have won this year’s 14 & Under Tennis Europe Winter Cups by HEAD by claiming victory at the final rounds of the indoor team competition of the boys’ and girls’ events respectively.

The Czechs just failed to defend their girls’ title against the Russian girls, who scored a 12th win, avenging last year’s final defeat in the process. So dominant has the team been that it has made 16 appearances in the last 20 finals, and since 2013 Russia has featured in every final except in 2016. In the boys’ competition, France has claimed a first win since back-to-back victories in 2010-11, while Romania advanced to the final for the first time ever at this event. 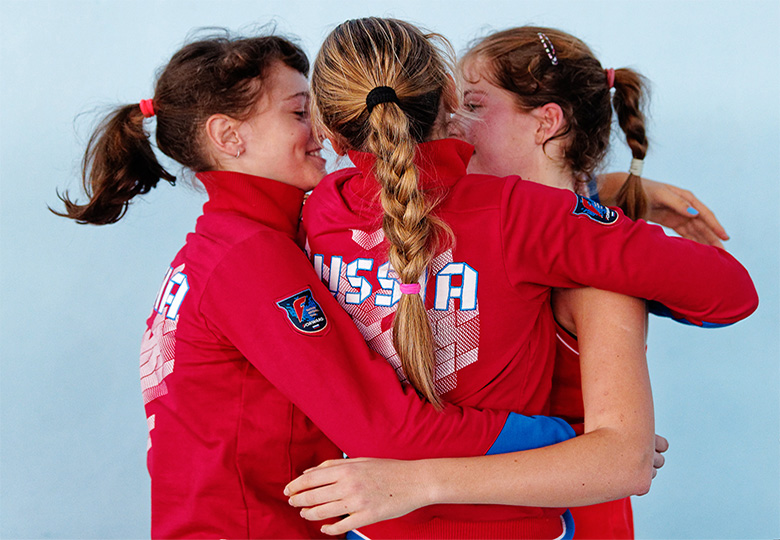 The French #4 Gabriel Debru (ranked 49) got things off to a flying start, taking out David Alexandru Gheorghe 6-1 6-0 in 51 minutes. His teammate and French #1, Antoine Ghibaudo ranked #13, secured the title by upsetting the fourth-ranked Romanian #1 Mihai Alexandru Coman 6-2 6-4. With the doubles uncontested, the French boys lifted this trophy for the seventh time.

Urged on by their home crowd, the Czechs had a battle on their hands from the outset. 13th-ranked Yaroslava Bartashevich up-ended the Czechs’ plan with an upset over Brenda Fruhvirtova. The match turned out to be an epic battle, and after three hours and ten minutes the Russian was the victor, posting a comeback 5-7 7-6(3) 6-3 win. This win boosted the Russians’ confidence as 5th ranked Anastasiia Gureva came out of the blocks strong against sixth-ranked Kristyna Tomajkova. The Czech #2 put up more resistance in the second set, but Gureva held out for a 6-1 7-5 win to seal the tie 2-0 for the Russians and take the title back from the Czechs on their own turf. Understandably exhausted and with the win already confirmed, the doubles was not played, handing the Czechs a consolation walkover win.

Road to the Finals

At the qualifying rounds in Germany, France took out Luxemburg 3-0 before seeing off Ukraine 2-1. In the qualifying final, they defeated the host nation 2-1 to finish atop Group B. In Veska, the French boys had taken out Great Britain in the quarter-finals 2-1, with the tie being decided in a tense doubles championship tiebreak. They then outplayed Russia 3-0 in the semis to qualify for their 14th final.

The Russian girls got their campaign off to a strong start in qualifying in Budapest, defeating Finland then Hungary 3-0. They lost to Great Britain in the qualifying final to finish 2nd in their qualifying group. This loss pitted them against Group D winners Belarus in the first round of the finals. They saw off their neighbours 3-0 before qualifying for the final over Switzerland, clinching the deciding doubles rubber 10-6 in the championship tiebreak.

A total of 188 national teams were in action over the last month across the Winter Cups’ three age categories. Complete results can be found here.

14 & Under Winter Cups by HEAD in Numbers